Fascinating oddities of the plant world 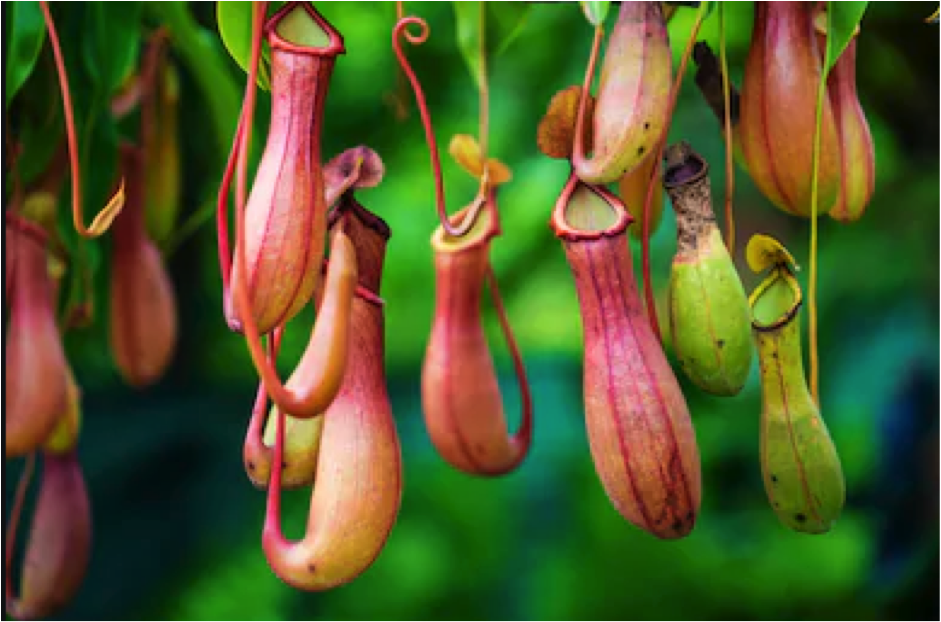 As a young teen I was fascinated by the Venus Fly Trap, Dionaea muscipula. This incredible oddity of the plant world had a mechanism that would allow it to close and trap a fly or anything else it was lucky enough to trap. My interest turned to – why? It turns out these plants live devoid of nutrient to feed on and in order to survive, the plant adapted or evolved to be able to trap and consume nutrients out of insects. As I developed my interest I learned that there were a few different genus of carnivorous plants all with the same common trait of living in nutrient deficient environments usually peat bogs and all bug eaters.

The Nepenthes plant unlike other Carnivorous plants is a vine of up to 15 meters in length, originally observed and named in the mid seventeenth century in Madagascar, where it was given a common name of Monkey Cups after witnessing a monkey taking a drink out of the pitcher of the plant.

More commonly known as the tropical pitcher plant, Nepenthes grows mostly in Indonesia and the Philippines, interestingly though there are 4 species native to Australia.

The plant itself forms a leaf from the stem but the leaf has a tendril on the tip and the end of the tendril has a brown tip that may develop into a pitcher. As a small plant the spacing between new leaves is quite close and quite a lot of pitchers form presumably to feed the plant sufficiently until the plant begins to vine.

The pitcher has a bulbous lower half usually part full of water with the upper half narrower, the opening or Peristome can be ornately coloured and glossy. Above this is a lid that seems to act as a umbrella to a degree. The underside of the lid is laced with a nectar as is the rim and very attractive to insects to the point of them getting ‘nectar drunk’ and losing their balance and falling in. Here they are met with a waxy slippery surface with downward pointing hairs and in the unlikely event of the bug managing to fly up to escape, it will hit the lid and fall back in again. Here having fallen in the water, the bug will drown. The lower part of the chamber has glands the excrete digestive enzymes aiding in the breaking down of the insect carcass and allowing the plant to absorb what it can in the way of nutrients from the soft tissue of the bug. Nepenthes is not able to digest hard shells of bugs so these remain and eventually the pitcher will die and rot but the leaf will continue to photosynthesize.

As the plant grows, the spacing between leaves increases and the tendrils will spiral around anything it can find for support, there is also a difference between the upper and lower pitchers. It is believed that the upper pitchers are after a different prey and are therefore task specific.

Flowering, the plant produces rather unspectacular flower spikes of either male or female and are held away from the vine itself in an effort of the plant to not accidentally eat its pollinators.

Nepenthes typically are from humid shady jungle areas. There are divisions of high level, those found on mountain tops and lowland level plants. Trying to grow these as an enthusiast can prove a challenge with many growers using indoor areas with grow lights. I however grow mine outside just fine, although I find the Hybrids far easier and forgiving – a personal favourite is called Miranda which has the right blend of a big size with nice coloration.

There are now around 180 discovered species with some critically endangered. New species are still being discovered – usually in the mountain tops of uninhabited Asian islands and as recent as March 2020, a new one was discovered on an island in the Philippines.

Some plants produce fairly small pitchers while others produce monsters of 40cm length and fat enough to put your forearm inside.

The plant world never ceases to amaze and intrigue me.