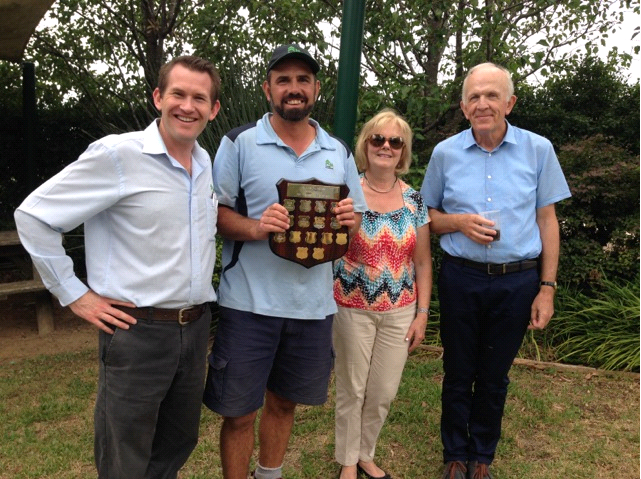 Ben Turner was the recipient of Alpine Nurseries 2016 Knox Award for Excellence.  The award is in recognition of a significant contribution made by a staff member throughout the year.

Managing Director, Peter Knox commented that “Ben has done a great job over the last year building his management skills to enable him to deal with the substantial growth in our nursery at Arcadia.  Ben has had to budget, coach, mentor and develop his team, as well as applying deep horticultural skills to the nursery development.  Ben has really risen to the challenge and done a great job.  We are very proud of him”.

We would like to congratulate Ben again on receiving this Award and take the opportunity to share a little more about his journey so far.

Ben literally grew up in the industry in a family owned nursery business.  He completed his apprenticeship in Nursery Production, a 3 year intensive course with a focus on irrigation and propagation. He then spent 10 years gaining valuable industry experience in various wholesale and retail nurseries, developing exceptional horticultural knowledge including the enviable skill of grafting citrus.

Ben joined Alpine 13 years ago as a nursery hand, and became a Section Supervisor 2 years later. As a supervisor Ben held responsibility for nursery irrigation, overseeing the production process and maintenance of our 25L deciduous trees and other general 25L lines. He was also our reliable live-in caretaker for 5 years – a heavy responsibility ensuring our irrigation systems were fully functional each night to avoid damage or loss to our stock.

In 2014 Ben accepted a Nursery Manager position at our most recently acquired site in Arcadia, a 10 minute drive from our head office in Dural. Overseeing two staff, Ben quickly filled the then 4 hectares with a selection of our core lines.

In October 2016 we took possession of the adjoining land at Arcadia, increasing the total growing capacity from 4 to 8 hectares which formed part of the process of transitioning the plants being grown at Impact Grasses QLD.

This required a huge cleanup effort including the replacement of irrigation and infrastructure, all while managing delivery of 15 semi-trailer loads of more than 120,000 plants.  Not to mention juggling a busy family life and welcoming the birth of his second child.  It’s no surprise Ben was awarded the Knox Award for his fantastic contribution in 2016!

As we expand our operations in Arcadia, Ben’s role continues to evolve and he now oversees 12 staff, 8ha including a 4000m2 glasshouse and additional infrastructure. Ben said he is “appreciative of the rare opportunity Managing Director, Peter Knox has given him to play an integral role in Alpine’s expansion program.  I am supported by a great team, where everyone is learning and growing into their roles together. I love learning new growing methodologies and trialing plant lines, particularly indoor varieties and succulents.

He is really looking forward to seeing the Arcadia site full of stock and settling into the routine of keeping the nursery full – but with strong sales and Alpine’s continued plans for expansion this may be a little while down the track!